David Bell's mother was a member of the Kwakwaka'wakw Band from Alert Bay on the north end of Vancouver Island. David became an artist working in silver, wood carving, original paintings and print making. He had intended to use a First Nations name for the boat but his first choices were already taken by numerous boats. To complete the registry of the boat he selected one of the moons of Jupiter, Ganymede, because it was used in early navigation.

During David's and my conversations we agreed that a First Nation's name would be better but we never spent any time trying to select something apporpriate. Unfortunately David passed away shortly after we bought Ganymede so, as with many unanswered boat questions, David was not part of the name selection. Or was he?

One of David's prints, a hummingbird and flower, was copied for a decal application to thermal cups. These were sold to the tourist trade and on the packaging, with an introduction to the artist, was a quote by David regarding the art. David said that in the summer months, when working on his boat, hummingbirds would hover, watching him have lunch and work. That seemingly inocuous quote set me in search of the Kwak'wakwa word for hummingbird. In 2005 Google was not the ubiquitous source of knowledge that it is now and the U'mista Cultural Society web site was in it's early stage of developement so I was unable to get a dictionary of Kwakwaka'wakw/Kwakiutl words.

Over the next two to three years I worked with David's design on the computer with a view to using it somewhere on the boat, finally ending with the motif that is on Kanilela's hull with the name and that appears in the blog. Also during this time I did some name searching asking various elders but had a nagging suspicion that the name would be too complex to ever explain to a customs official in a foreign company. Finally the U'mista site had a link to the First Voices web site. As feared, hummingbird was difficult, k'wa'akwamt'a. There were only 2 words that were easy, ha'mu - pigeon and nala - swan, neither of which had any relationship with David. The last entry on the list of the bird category was ka'ni'lela - bird soaring, wings not flapping. Although the concept is as far from the vibrating wings of a hummingbird it did describe a sail to perfection. Although the motif and name do not match they both tie to David. 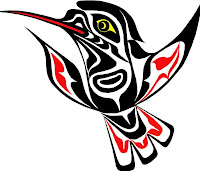