I have no excuse not to work on the blog. Kanilela is in Marina Cortez with power and the Rogue Wave is providing a good internet connection. Mags has returned to North Vancouver to spend some much missed “Granny Time”. It sounds like Ojies’s welcome was everything Mags could hope for.


I am staying with Kanilela to finish the watermaker, install the amp hour meter, find out why the anemometer quit giving wind speed and direction and finally, determine if the holding tank does have a pump problem or a gauge problem. What kind of Xmas vacation is that?

First, to back up to Ensenada.

It has always been my favorite “near” border town in Mexico and although it has been several years since I last visited, I really enjoyed the shops and people in the old city. People were helpful and friendly. Shopping was great and prices were good. Ensenada has 3 larger marinas and a few smaller docks that can be used. Anchoring inside the breakwater area is not permitted. Cruiseport Village Marina staff help boat owners prepare their entry paper work, including accompanying you to the Port Captain’s office so, knowing we had some issues, we decided to stop at Cruiseport. The huge Mexican flag that welcomes you into the port definitely announces the start of a new adventure.


As you may have heard, last year many US and Canadian boats had problems in Mexico due to a multitude of documentation issues. Hull identification numbers were one of the major problems because some of the inspectors did not know that boats made in the 1980’s and before did not have a HIN and incorrectly assumed there was a problem and impounded many boats. I won’t go into our details beyond recommending that people do not use the online application. Do everything in person and Ensenada is probably the best port because they handle so many boats and all the offices are in one large room. In some cities the offices are spread throughout the town. Fortunately Jonathan and Enrique from Cruiseport and the very helpful staff in the four government departments located in the Port Captain’s office helped us to the successful conclusion with all the necessary forms in place. Although we had to pay twice for the TIP and four times to receive one tourist visa, we are here and happy.


We left Ensenada planning to sail through the night and spend an afternoon and night at Bahia San Quintin. By late afternoon we had no wind and a thick fog bank enveloped us until about 2:00 am, the fog then receding to the coast as a light South wind developed. Bahia San Quintin is a bay protected from the North or Northwest wind by a point with only a few fishermen’s houses on the beach. The ocean swell can make it a rolling anchorage and the bay is so shallow you have to anchor about half a mile from shore. An open roadstead anchorage. We dropped the hook and after seeing it holding well, I immediately went to sleep. Two hours later, I was awake with Kanilela pitching in a strong wind and swell coming from the south. Surf was breaking off our stern even though we were so far from shore and in 20 feet of water. We quickly pulled the anchor and headed south.


We continued through the night and next day with two possible destinations. One was at a fairly exposed anchorage beside a sea lion colony on Isla Cedros close to the Baja coast. Our other option was a small group of three islands, Islas Benitos, further out in the Pacific. The Benitos are small and rocky with a fishing village on the west island, an elephant seal colony on the low center island and the east island uninhabited rock. The best anchorage was off the elephant seal colony so we decided after all the sea lion noise we had put up with from San Francisco down the California coast we would try the Elephant seals as neighbours. I can’t say they were quiet but they definitely were a different noise and were almost quiet at night. The water was clear with 25 foot visibility and the stars bright until the growing moon rose. A beautiful relaxing anchorage although we did not see the elephant seals up close because there is concern for their colony and beach landings are discouraged.


The next day we made the southward crossing to the Baja coast to Bahia Tortuga, Turtle Bay, and were at anchor by late afternoon. We spent 3 days wandering the dirt streets comparing the numerous tiendas, small grocery stores, buying something from all of them and being treated very well, with a quiet curiosity being evident. These people are used to cruisers because this is the first of two stops that the Baja Haha makes which had passed through with 175 boats a month earlier. Four other boats shared the anchorage with us and one was north bound after having sailed down in the Baja Haha. They were amazed how empty the bay and town were. There used to be two fuel docks but only Enrique’s was open. Fuel is delivered to your boat in a big square plastic tank carried in a panga. A gas generator runs an electric pump to fill you tank. There is no measurement system so the age old cruiser’s complaint is the quantity was less than charged. We just considered it a cost of travel on a remote coast and had a really enjoyable time. Maria, Enrique’s sister, and her son Victor, run a restaurant with wifi so we had a few excellent dinners there. We became so friendly with them there were hugs all around as we had our last dinner and prepared to leave. The Bay is one of the largest, most protected anchorage on the west coast of the Baja.

After the relaxing stop in Tortuga, we were feeling Mags’ pending flight to Canada looming and decided to have any spare days in the Sea of Cortez in case we lost our weather window on the outside. We had mixed wind and no wind, sailing and motorsailing for the two day trip from Tortuga to Bahia Sta. Maria. En route on the second day Mags saw a big turtle swimming by and our usual dolphins often kept us company. Bahia Sta. Maria is a more open anchorage than Tortuga and has no village but is well placed and easily entered. We had the full moon for our night at anchor but had to pull up the anchor at 4:00 am to set us up for a daytime arrival in Cabo. 20 miles south is Bahia Magdalena with both a village and a town but both located several miles from the entrance to the Bay so we saw their lights at night but passed the entry to the bay during the day on our way to Cabo San Lucas. Another milestone on the sail was the crossing of the Tropic of Cancer.


Through the night we followed the progress of another boat, both by the lights in the distance and the track on radar, that we thought was probably a sailboat. Come dawn we realized that it was the big Aussie catamaran, HooRoo with Jill and Jim who we met earlier back in Ensenada. We visited by radio and went our separate ways, ships passing in the night, well more accurately in the dawn. We have seen a lot of fishing boats at night on the trip but not many sailboats. 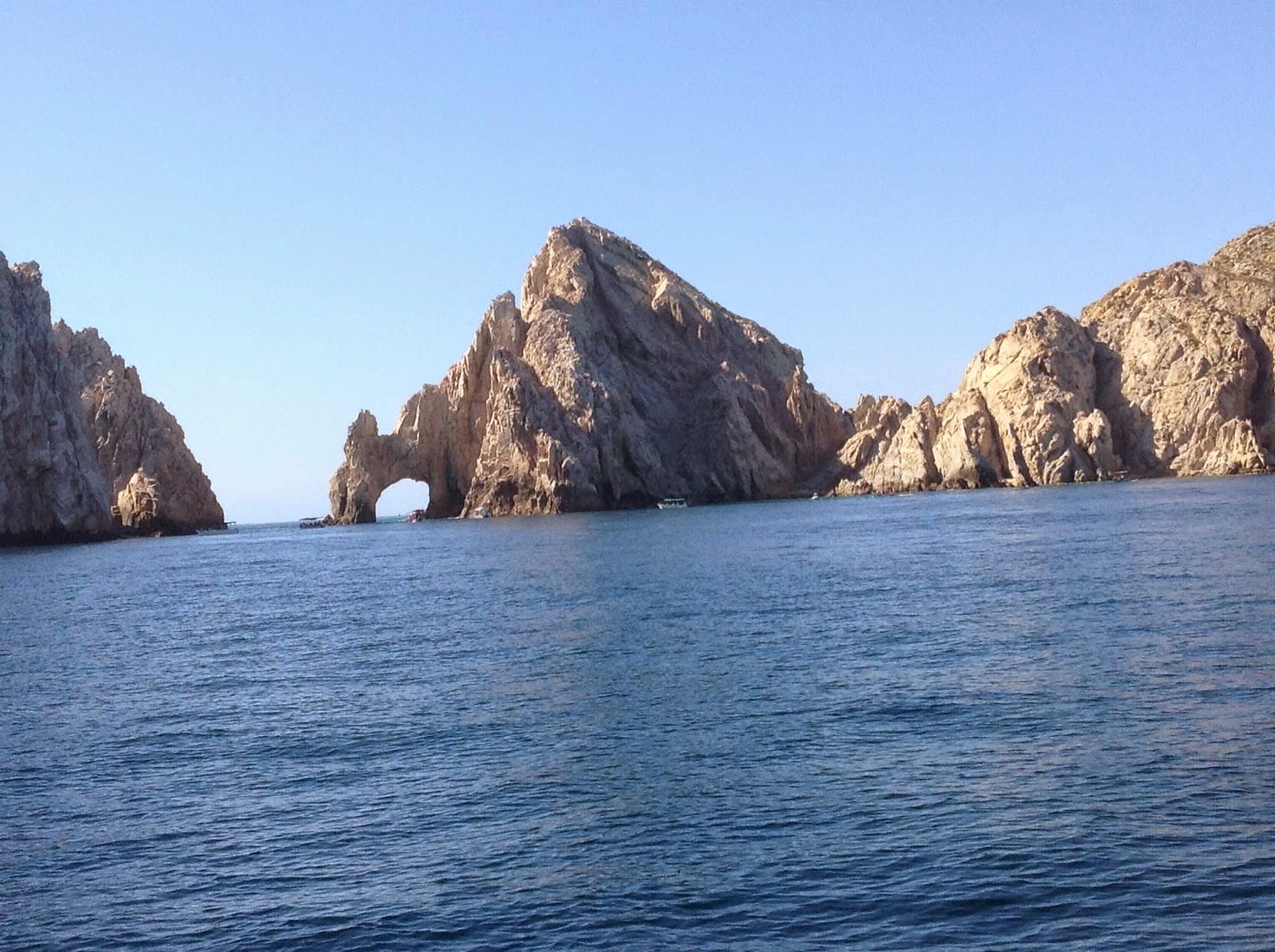 It does not matter how prepared one is for the tourista development of Cabo San Lucas, after the dusty small town of Turtle Bay and remote, unpopulated anchorages like Islas Bonitas and Bahia Sta. Maria, it is a shock to the senses. The location is beautiful, the Arch, la playa, the jagged rock formations and the clear water are everything one hopes for. The condominium developments and all the beach activities, glass bottom pangas by the dozen, parasailing, sea-dos, and the hustling for the restaurant trade were overwhelming. We spent two nights at the marina and walked all over the downtown area. Workers were everywhere trying to rebuild after hurricane Odile, about 30% of the marina space is destroyed. The small harbour was chaos with the pangas, the cruise ship shuttles, the sports fishing boats and the tour boats. The trip up the inside coast to La Paz brought a welcome tranquility.