The trip from Tuxtla Guttierez to San Cristobal de las Casas was in the mountains, with winding roads that run through small towns and villages, but it is not a great distance so it took only a couple of hours. With a midday arrival, Mags and I were able to check in to our hotel, La Posada Media Luna, an excellent find, and get out to explore the town which is set in a cool highland valley at 1940 meters. The Cathedral, on the tree lined central plaza, was started in 1528 but took many years to complete due to earthquakes. San Cristobal is very clean and proud of its heritage and has been a tourist destination for decades. The architecture bore extensive resemblance to Antigua, Guatemala, both beautiful old colonial cities.


We met-up with the crews of s/v Grace and s/v Kosa which always leads to lots of eating and drinking while making plans for future travel. Jim and Carola from Kosa were heading back to Australia for visit home before they returned, so it was doubtful we would see them again before next October in Marina Chiapas. Paul and Judy, we would probably see at the next stop, Palenque. 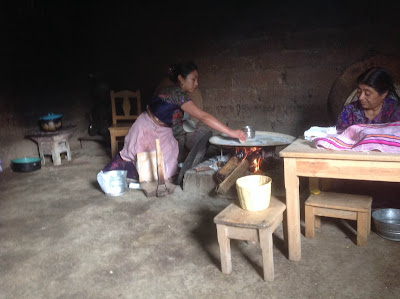 We took a side trip to two small Mayan villages located in higher valleys near San Cristobal. Although they were both Tzotzil Mayan villages, the differences were startling. The traditional women’s dresses and embroidered blouses with short cape like jackets in San Lorenzo Zinacantin were based on a predominantly dark purple back ground. The services in the Catholic church, we are told, are quite conventional. The hand weaving is still practiced and we managed to visit a cooperative that demonstrated the older ways. It was interesting and, generally when asked, the people were willing to have their pictures taken.

The next valley, a little higher up, is home to San Juan Chamula. The women all wear black skirts, mostly woven from a black shag wool that has a pile about one inch long made from their local black sheep which are highly regarded. The embroidered blouses and cape like jackets are beautiful but darker than the Zinacantin’s. The greatest differences though exist in the religious services. We visited the local church of San Juan and inside, the floor was covered with pine needles and families were grouped on the floor. Lines of candles and bottles of coca cola, beer and home brewed rums, stood in front of them. While and elderly women of the family group chanted prayers to deities that are both pre-Columbian Mayan and Christian. The air was heavy with the smoke and incense as the family drank the coke, beer and alcohol. Photographs are forbidden in the church and even outside, the Chamulans do not want their picture taken as they believe it may capture their spirit. The village is rustic with lots of booths selling crafts to the tourists. While we were there, most of the tourists were from other areas of Mexico. The Mexicans have discovered Chiapas and are intrigued and proud of the diverse cultural backgrounds their country is contains.﻿﻿


Back in San Cristobal we walked miles visiting museums and old churches as we dodged the afternoon rains. After three days the tug of two granddaughters and a pending party in Oyama kept us moving on.
Posted by s/v Kanilela at 8:07 AM