Nothing puts a smile on my face faster than going to new places.

The original capital city, Leon, is about two and a half hours inland from Marina Puesta del Sol. The buses for the closest town, Chinandega, leave at 5:00 am and about 6:30 am and return later in the afternoon. That is a drawback to the remoteness of Puesta del Sol. The plus is that there are taxis available that, when shared with another boat, are not unreasonable. Mary and Paul from Genesis III are as eager to travel as we are so the solution was easy. We taxied to Chinandega and took a micro bus to Leon.

The city in its present location, dates from 1610, after the original site that dated back to 1524 was abandoned due to repeated earthquakes and volcanic eruptions. It remained the capital until 1852 when Managua was selected as the capital to end conflicts between liberal Leon and conservative Granada. Leon has remained the cultural and ecclesiastical center of Nicaragua as well as the center of revolutionary politics.


The American enforced isolation of Nicaragua during the early Daniel Ortega era of the eighties could have contributed to Leon’s enduring colonial charm. With a devastated economy from the blockading of the country, the old buildings remained as they had for centuries with new development being minimal.

Although not as polished as Guatemala’s Antigua or Mexico’s Campeche or Oaxaca, it is a beautiful city with colonial architecture that is lived in by the locals and not just venues for tourism. There are a lot of backpacker hostels with the usual Canadians, Aussies and

Europeans plus a few European tourists in the beautiful old colonial hotels. Leon has not yet been discovered by the masses and it is beautiful. People are friendly, pedicabs and horse drawn work carts are common and the pace, though busy, was not as frenetic as San Salvador.


Our hotel, Hotel Real, two blocks from the central plaza was a find in the Central America Lonely Planet Guide. It had a verdant courtyard with a breakfast restaurant and lounge area with the ubiquitous Nicaraguan rocking chairs and a roof top deck with views of the city. A double room with private bath, air con, wifi, TV and an included breakfast was $53 a night.

Churches and colonial government buildings are frequent with the Cathedral at the main plaza being the largest church in Central America. The tomb of Ruben Dario, Nicaragua’s renowned poet who died in 1915, is there and you can climb to the roof of the structure to get views out to the volcanos that surround Leon.

We visited the Fundacìon Ortiz Art Gallery, reported to be Nicaragua’s finest gallery, and were amazed by the range of art displayed, from the earliest colonial religious iconography to eighties revolutionary themed, dark, pensive works by

Nicaraguan and Centeral American artists. The most surprising displays were the two rooms full of Joan Miro’s surrealistic, abstract art, with most being his minimalist curvilinear drawings with bold solid primary colours interspersed. The gallery had numerous Picassos and other European artists of the post-impressionist era. Well worth a visit.

Around the corner from our hotel was El Museo Entomològico de Leon. Yep – bugs, lots of bugs and butterflies and scorpions and on and on. In Southeast Asia I always went to entomology displays and museums so I could not resist this. We were unusually fortunate to meet the man who had spent thirty years collecting and presenting the collection that is primarily Nicaraguan but has extensive specimens from the rest of Central America and the world. Since his arrival from Belgium thirty years ago, he has seen remarkable changes both politically and socially in the country and shared many insights as to past, present and probable future effects these have had and will have on Nicaragua’s biodiversity. A really interesting time.


You cannot be in Nicaragua and not go to the international award winning Flor de Caña rum distillery and you must climb a volcano. We did them both in one day!


We were picked up at 8:00 am, from our hotel for a half hour drive into the country to the Flor de Caña plant with a really nice girl from Israel riding with us. We were joined there by a group of ten very friendly Belgiums. The tour started in a small theatre with a brief history of the operation. We then proceeded to the cooperage where the American white oak barrels from the US bourbon producers are taken apart and then reassembled with a better seal, then pressure tested and approved for filling, if they pass. Even with all this effort there is a 6% evaporation loss and some barrels exhibit additional leakage. These barrels become the source of rum used to top up the evaporation losses in the other barrels. The topping up barrel must be from the same vintage as the barrels they are added to.  The 6% loss is known as God’s treat. We were in the smallest warehouse which housed 10,000 barrels. Flor de Caña makes 4, 5, 7, 12, 18 and 25 year old rums. The have some barrels older than 25 years that are for the family but may be used in a special older release in the future. If anything I have said is incorrect I can blame the tastings that were provided and I, of course, got Mags’ portions as well! Kanilela now has a 12 year bottle safely stowed.


We returned to Leon for lunch and were then picked up by 4x4 Land Cruisers for another trip into the country. We quickly left the highway and travelled for an hour and a quarter up narrow dirt tracks that sometimes passed small subsistence farms. These people receive funds for maintaining the 4x4 tracks and the trails above. Once we reached the parking area a dirt trail led up from the last of the vegetation over the lava and ash of previous eruptions, the last of which was in November of 2015. Yep, this is a live one!

The hike to the top took about 45 minutes and my Mexican sombrero was appreciated. While still daylight we were able look over the edge of the vertical walls down 1200 metres, seeing gasses venting from numerous places. The crater is about 700 metres across and the sheer walls, the gases and the heat keep anyone from entering. 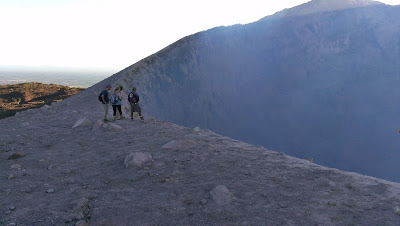 We then continued down a bit and hiked around to the west side to watch the sunset in the distant Pacific Ocean. Then we returned to the crater where in the darkness, molten lava was visible. The hike down the trail in the dark with flashlights was difficult enough that an American on the trail fell, hitting his head and opening a good cut on his arm. It was a good workout but worth every bit of effort to see the molten lava.


After three nights at the hotel, the streets of Leon felt very familiar. We never sensed any imminent danger, only friendly people with very few beggars and drug dependant street people. We went to a dentist and had our teeth very professionally cleaned for $30 US. Mags found a hairdresser she was very happy with. Leon was a place we had to leave before it captured us forever.


We returned to Puesta Del Sol to wait for a weather window, avoiding the worst of the Papagayos to hopefully head to Costa Rica.
Posted by s/v Kanilela at 10:50 AM