We are here – Paradise!


The fifty mile trip from Samara took us to the southern tip of the Nicoya Penninsula, Cabo Blanco and as Eric in the Sarana’s Cruising guide says, “The weather is usually good so the only important thing is not to hit the point.” We didn’t. The turn marked our most southerly progress on this trip so far, 9 degrees 32 minutes north latitude. It feels good to be in the single digits of latitude.


Bahia Ballena has long been a secure destination talked about by cruising sailors both in conversations and print. It is a large protected bay about two miles deep with about two miles separating the north and south anchorage locations. The entrance between Punta Tambor and Punta Piedra Amarilla and their reefs is about one and a half miles with very little swell entering the bay. The bay faces southeast onto Golfo Nicoya so there is good protection from the open Pacific. Other than afternoon thermals from the northeast it is a perfect anchorage in the dry season. When we arrived we went to the north anchorage to have a swim and quiet night before relocating to the southern village end the following morning. We had the quietest sleep since some of the calm anchorages up in the Broughton Archipelago. I always get up a few times through the night to check the anchor and surroundings, more often in windy conditions. The few recreational boats that had been at the beach left with sunset and we shared the anchorage with a fish boat that left in the night. The moon came up about 11:00 pm and the silence was deafening. Even the monkeys were quiet, wanting us to sleep. The afternoon breeze had died and the water was perfectly flat. What a beautiful night.

We had a leisurely morning with a slow trip along the beach as we re-anchored on the south end of the bay. The legendary Yacht Club Bar, the setting of so many of those cruiser’s stories has long since closed but the pier and building are still there evoking a past that has sadly moved on. The village of Tambor has some great bars and restaurants and the resident expat community frequent those.

The Tambor Tropical, with beautifully finished varnished wood has become a cruiser friendly, wifi available, mecca, but we were the only boat in the bay so no tales of wild passages were embellished at the bar. While there we met two separate Canadian couples,

one from Ottawa and the other from Calgary. The Ottawa couple are building locally and the Calgary couple were a friendly wealth of Costa Rican information having travelled here several times. There are two other sailboats at anchor here but it appears neither have moved in a long time and no one is onboard.


The village has a very good tienda with an amazing selection of goods in such a small store. The locals are friendly and this is not a tourism dependant community. There are expat communities down the coast and a couple of resorts, one, an all-inclusive, on the bay but few of these people venture into the village. Bahia Ballena is not the Tica (Costa Rican) tourist destination that Samara is and it appears that more expat here own private houses on the beach and in the surrounding hills. There are no large condo developments at Ballena, they are further south along the coast. It has a very relaxed atmosphere. No jetskis, or touts for tourist activities.

Our south anchorage location is off the old concrete fishermen’s dock that has a building with an incongruous new metal roof on the old concrete slab. The dock is surrounded by fishing pangas with stern anchors and bow lines running to concrete steps that lead up to the elevated dock. At low tide, some of the stairs do not reach the water level making access difficult. The immediate shoreline is rocky, not inviting beach landings. There is a long fish cleaning table on the water side of the building with a steady progression of fishermen cleaning their catch. The pelicans and gulls provide a recycling service.

Most of the surrounding single storey buildings are old with rusted corrugated metal roofs. A line of connected concrete dwellings on piles in seeming disrepair provide most of the local housing. They were probably part of the original construction to house workers for the fish packing in more prosperous times. Several other homes are tightly clustered to the east of the dock and on the hill behind, some old some new, all in a close packed group.

Beside the fishermen’s dock the concrete dock supporting the closed Yacht Club Bar is well painted and seems a bit out of place, especially considering it is now abandoned. In the evening howler monkeys on the hill behind and in the bush to the west claim their territory.


Tambor Village is about a kilometer from the anchorage. We have good beach access where the rocky shore meets the long sand beach. Usually the surf is not a problem but the flat sand beach makes the dinghy wheels, once again, a fabulous purchase. DaNard Marine, DaNard Marine, DaNard Marine…. That was a small subliminal visual message for our wheel manufacturer…. The walk to the village is in the shade of the shore line trees with some modest beach homes set back in the trees starting about half way. 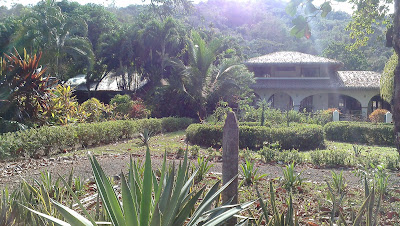 They are in a beautiful setting and the Tica and Expat owners all waved with big smiles. This is not a stressful existence.
Posted by s/v Kanilela at 11:59 PM