Finally, anchoring in clean, warm, snorkelling water
We had to wait for the high tide at about 1600 hrs (4:00 pm) to navigate the channel out from the marina. This left too little time to make our three hour passage to Islas Tortugas so we made the short trip back to Isla San Lucas and anchored before dark. Back to jail again! Genesis III accompanied us and as they had not been at San Lucas before, we again toured the former island penitentiary and managed to hike some more trails, finding howler monkey families in the trees.


The problem with paradise is that it was long ago discovered, especially in a country like Costa Rica that has had a vibrant tourism industry for fifty years. The fortunate part is that as busy a tourist destination as the Tortugas, Isla Tolinga and Isla Alcatraz, are no one lives on the islands so you have the entire area to yourself from about 4:00 pm when the pangas and their passengers leave until 10:00 am the next day when they all come back again.


We anchored off the east side of Isla Alcatraz where the Sarana Guide gives the way points and had a peaceful night. Early the next morning we had a beautiful time snorkelling on the pinnacle rocks off Isla Alcatraz. The water was warm, visibility was great and there was an endless variety of tropical fish, angels, butterflyfish, wrasse, parrot fish, jacks, porkfish, puffers and even a Moorish Idol. Great fun, but I forgot to take the GoPro! The white sand beaches are reported to be the whitest in Costa Rica so there must have been coral at one time but there was very little evident in the areas we snorkeled.


A fabulous morning, after which we motored one mile to the west of Isla Alcatraz to Bahia Curu on the Nicoya Peninsula. The Curu Private Wildlife reserve was first settled as a farm in 1933 by a German immigrant family and during the 1970’s began the transition to a private wildlife reserve. We had heard numerous good reports of the research they are facilitating and the care they are taking with the natural habitat. After spending the morning snorkelling we decided to relax on the boat at anchor for the afternoon and save our visit to the reserve for the early morning when the animals are typically more active.


7:00 am saw us landing the dinghies through a gentle surf at the administration office. We were immediately greeted by several Capuchin monkeys, some white tail deer, a pizote and an agouti.

There was no one around yet so we started on the hike that I had read about. The Ceiba trail follows a small tidal estuary along some mangroves and old mango orchards for a little more than a kilometer ending at an enclosure where spider monkeys are being rehabilitated. They are not free to roam the forest but their enclosure was large and I believe they needed feeding to live. There is an active research program with them so it may lead to spider monkeys being re-released into the wild on Nicoya. They walk incredibly erect with long thin arms dangling at their sides.


We saw many more Capuchins, howler monkeys, several more deer, some more agoutis, and many, many bird varieties with the turquoise browed mot-mot the most distinctive. Although anteaters and crocodiles live in the reserve we did not cross paths with either. Our return on the Avispero trail brought us to the shoreline and back to the restaurant office area ending a 3+ km hike that was full of rewards. We were able then to pay the $12 admission and had breakfast in the restaurant. Surprisingly all the animals that greeted us before the reserve opened were gone by the time we returned to our dinghies. 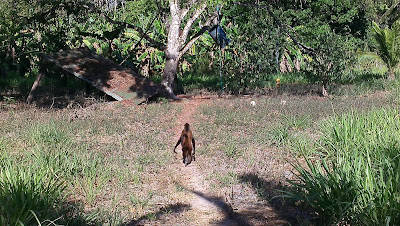 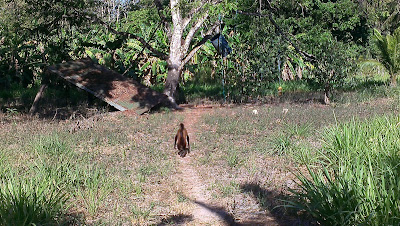 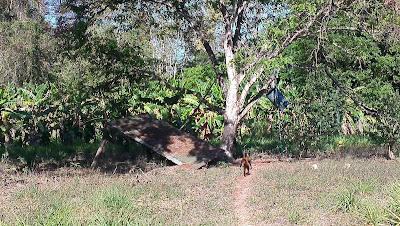