To our final stop in Costa Rica


After a brief two day stop we left Bahia Drake at 4:00 am, in an early dawn darkness to ensure we arrived at Golfito in the day light. There were a few lightning strikes in the mountains and squalls showed on the radar and could be seen blocking the stars to the SW, to seaward. Fortunately the clouds parted for us to slide through as the sun came up over the Oso Peninsula. The trip skirts around the verdant Peninsula, home to the Corcovado National Park. Clearly this is rain country as nothing can be so green and lush without copious amounts of rain.


While checking the engine room shortly after rounding Cabo Matapalo and entering the Golfo Dulce, Sweet Gulf, we noticed a fine diesel spray misting the top of the engine. Before shutting down the engine to let it cool, a quick examination isolated the source to somewhere in the high pressure fuel supply lines running to the injectors.

Once again our Goddess of the Sea, Matsu, was smiling on us and one of the sweetest winds came up from our stern giving us a downwind sail to Golfito twenty miles distance.


As we neared Golfito, I radioed Tim at Land Sea to check for mooring buoy availability or anchorage options. I told him that we had a fine diesel spray issue and he responded with “when you start your engine, place a clean white sheet of paper in the area to identify the source.” He also offered a side tie spot beside his houseboat to make repairs more accessible. We were starting to get an idea as to why it is called a Sweet Gulf.


We sailed about half way up Golfito’s entry channel before I decided we had better start the engine to ensure we were able to made the turn into the wind and continue up the channel to Tim’s. The engine started fine, the white paper trick worked great and with fuel absorbent pads carefully placed, the spray was stopped and the diesel drips were caught in a container. Fortunately the machine shop two doors over bronzed the leak and all is good.
As we neared Land Sea’s dock, with his irrepressible smiling face from behind his huge beard, Tim took our lines and welcomed us to Golfito. The location is incredible with a steep hill covered with large trees, vines, bromeliads and dense brush rising from the coastal road. Green on green. Tim and Katie arrived on their sailboat twenty one years ago from California. Tim spent some years doing yacht deliveries while Katie developed the Land side of the business. She has some beach front apartments for rent and is able to perform real estate services for Golfito. Tim has some buoys in front and the office building serves as a cruiser’s lounge with washrooms, showers, wifi, and an honour frig stocked with beer, sodas and water. 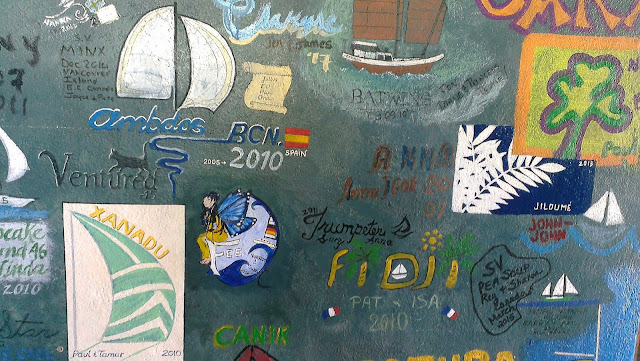 The walls are covered with sailboat names, their crews and the date they were there. Kanilela’s oft repaired, old Bluewater Cruising Assoc. burgee with our names and date was placed, under Tim’s direction, on a wall of marine memorabilia.
It was fun finding boat names from cruisers we followed around Vancouver Island and south.
Email Tim and Katie at landsea@golfitocostarica.com for any questions, real estate or cruising.


There were about five boats there with some others coming and going. It was great meeting Margie and Peter on Peregrina who completed their five year circumnavigation in the San Blas Islands of Panama and are now going into new cruising grounds up the west coast of Central and North America. Also there, was Nancy and her new puppy Popeye on Moondancer who is returning to Vancouver Island via Hawaii after many years in the Caribbean. Michael and Amanda on Perseverance who sailed from the Duluth, Mn out through the Great Lakes, the St Laurence and down the eastern seaboard to the Caribbean, now heading to Washington State, to then return to work probably in Montana. A neat young couple. We are hoping to receive an email from another young couple on Calyse who are heading to the US Virgin Islands where she will attend nursing school and he can return to being a skydiving instructor. Yes, I’ve misplaced their names.  A fun, interesting couple who we hope to see when we pass through the Virgin Islands. Quicksilver from Berkeley with Dave and Roberta also passed through on their northbound trip.


Golfito quickly joined Bahia Ballena as our two favourite places in Costa Rica. Golfito is a long lineal town built on the waterfront, extending north from Land Sea about two miles to the old Banana Shipping wharves of the United Fruit Company. The old company offices and residences are being restored. Within walking distance of Tim’s are a couple of good food stores, gas and diesel serving both cars and boats, road and dock, and hardware and marine supply stores. Most things can be found, it just takes a little looking. The people in Golfito are very friendly and helpful. Taxi’s run up and down the main road on a share basis. 700 colones (about $1.40 for the first person of a group) and 500 colones (about a dollar) for each additional person. The cars usually hold four people and as nothing is more than one block from the main road you may get short side trips to drop-off other passengers.


One morning at 6:00 am, at Tim’s suggestion, I walked 15 minutes south to a soccer field and then turned left up a little gravel road past some houses heading steeply up hill. When the houses ended the road became concrete placed many years ago and a sign said Golfito Rainforest Reserve. I continued up the steep climb with the single lane road completely covered by the amazing variety of trees. After about an hour of climbing I came to the first of the view points but other than some iridescent butterflies, blue morphos the most strikingly beautiful, and lots of bird songs no wild life was seen. Then a woodpecker started drumming and I thought this could be seen in North Vancouver but just as I managed to locate the crimson crested woodpecker I saw a Chestnut mandibilled Toucan sitting near the woodpecker, then several others flew into the trees close. How those “fruit-loops toucans” can fly with that monster beak is a mystery. Also, how they know when you plan to take a picture and then hide their beak behind a leaf is an even greater mystery.
Around the next bend the ground was scattered with ripe water apples and something was moving in the tree dropping more fruit. Because it was a solitary animal I thought it was possibly a sloth rather than a monkey but when I got a good view it turned out to be a white nosed coati or coatamundi. The fruit was so good he paid little attention to me. After a short climb to the next view point where I was able to see Perseverance riding at anchor far below.
After continuing for another mile past some fincas, farms, that were uninhabited, one with a sign saying it was a conservation area, the land had flattened as I followed the ridge line leading to some transmission tower sites. A couple of toucans flew within ten feet of me and their wings made a noise like the windmill blades on wind power generators and as they flew into the dense foliage they crashed into branches. How do these things exist? For most of the hike I had been expecting monkeys and thinking that it was a perfect environment for agoutis. I had gone about half a kilometer back when the trees above me were alive with gold brown squirrel monkeys. They are quite quiet and tiny little guys but incredibly fast and none of my attempted photos up into the canopy on the phone came out. Some were curious and came down the branches close to examine me, then scamped away through the trees, never staying still. As I continued down the road I turned a corner and heard rustling in the underbrush. There he was, my illusive agouti sneaking away into the selva. Needless to say, when I returned to Tim’s after a four hour outing, I was grinning like the proverbial Cheshire cat.


Another side trip from Golfito that we had heard about was about fifteen kilometers up the Golfo Dulce to Casa Orquideas where Trudy and Ron have spent 26 years creating a tropical paradise of indigenous and imported plants and flowers.
There is no road access but you can sail your boat there although the anchorage is marginal and the beach landing in a dinghy can be difficult so we took a panga that moors at Tim’s dock and he gave us a close to shore high speed trip up the coastline. I had phoned the previous day and Trudy met us at the beach, assisting the panga to land. She and Ron first started hoping to farm cash fruit crops but the beautiful setting quickly became the results of their passion for tropical plants. Interestingly, when Golfito was an important banana port, ships from the United Fruit Company would come with tropical plants from around the world and Golfito was famous for its wide variety that thrived. When the company left, the town’s gardens quickly became overgrown and then diminished. 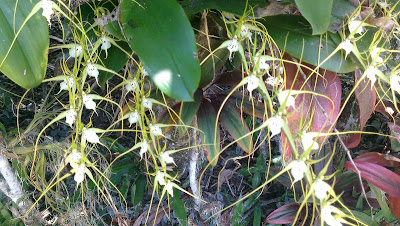 Fortunately, Trudy and Ron were able to take seeds and cuttings and introduce this vast selection to their gardens, palms, orchids, heliconias of the flaming gingers, bird of paradise flowers and upright lobster claw flowers, bromeliads and on and on. Even ylangi ylangi that is the sent for Chanel #5 and another miracle fruit that makes sour tastes sweet. We first ate some exceptionally sour lemon, then we ate the fruit and when we again ate the lemon it was sweet. It was not a sugary masking of the lemon, but rather a change in how our taste responded to the lemon. Needless to say there is extensive research on potential uses of this fruit. Trudy’s tour was fascinating and her knowledge infectious. 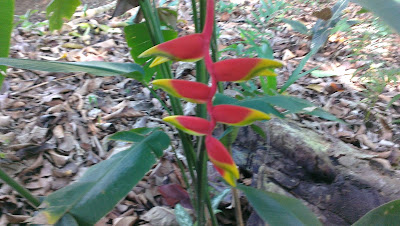 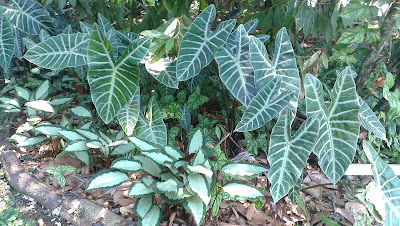 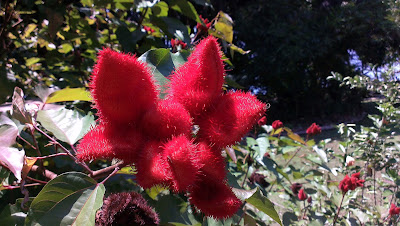 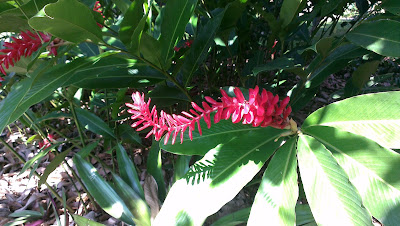 Soon it was time to leave Golfito and Costa Rica, so we started our paperwork exit procedure. The Immigration Office was the friendliest official we met in Costa Rica and possibly the entire trip. Customs and the Port Captain were also very helpful and a pleasure to deal with while we got our departure zarpe for Panama.
Posted by s/v Kanilela at 3:47 PM