Quepos and Parque Manuel Antonio, Costa Rica
18 – Marzo - 2016
Heading South East
Quepos was a banana port in its prosperous past but is now a service port for a small fishing fleet and the resorts in the area. The old ships pier has had some renovations and has a new dinghy dock and ramp. An armed security guard informed us that we could not dock the dinghy there. I explained that we had to go to the Port Captain’s office at the head of the pier and would return immediately. He radioed the office and we were permitted to go talk to the INCOPESCA office to explain our situation. I managed to get permission to go to the Port Captain’s office to complete our domestic zarpe and then return to our boat.


Quepos too has given up the best part of its bay to a new marina, Marina Pez Vela. Some incredible engineering was involved in driving a series of small and large radiused sheetpile formed concrete walls to create a breakwater of extraordinary cost.  They have only a perimeter of docks with the middle awaiting future expansion.  There are several party catamarans moored there that run over to the beaches near Manuel Antonio Park loaded with Costa Rican tourists. The marina used to welcome cruisers anchored off with a dinghy dock, showers, wifi and so on for a weekly price. To our surprise, they no longer accept any dinghies from anchored boats outside the marina, again for any price.


We managed to get permission from the INCOPESCA office that allowed us to use a local panga taxi to drop us at their new dinghy dock for a $20 charge for the 5 days we were there. The panga was 1000 Colones per trip ($2) and Jorge was a neat old guy. With the right amount of planning we generally were able to coordinate his arrivals.

We finally made it to town and were very happy with the market that is held Friday afternoon and Saturday morning on the waterfront walk.  PIt was probably the best supplied market we have seen with many farms represented and some craft items as well. There are lots of stores and restaurants in the town and the town's people were friendly and helpful.


Anchoring at Quepos is probably the most convenient way to see Parque Manuel Antonio. Some cruising boat have not been permitted entry to the park from the park's waterfront. They were told the only ticketing was from the main road entry and were not permitted to walk through the park to the entry. It is a small park and has a wide assortment of indigenous animals, most notably, two and three toed sloths.

We had been told that the weekends are incredibly busy and the park is closed on Mondays, even the poor animals need a rest after the weekend crowds, so we went on Tuesday. We had Jorge get us from our boats at 6:00 am so we could catch the 6:30 bus in Quepos to be at the park when it opened at 7:00 am. 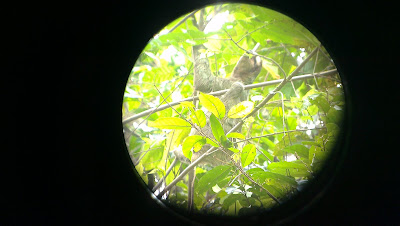 There are lots of guides available and the real plus to getting one is that they all have spotting scopes and you can take pictures through the scope. The main attraction was the sloths but there were capuchin and howler monkeys as well. 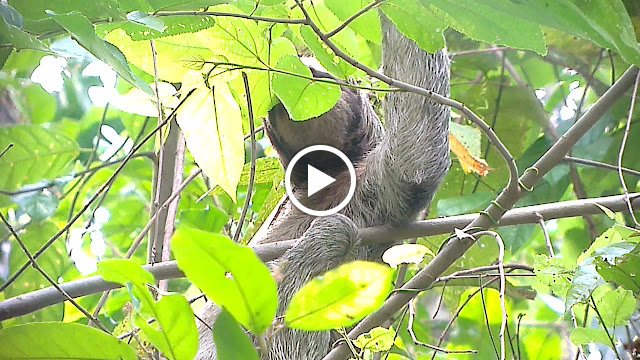