Great passage, well… very good….. great would have wind for the whole trip but 14 hours of sailing was good.  We left about 10:00 am and dropped the hook about 24 hours later. Stars, moon and lots of phosphorescence made for a pretty night. Saw dolphins, small rays and a couple of turtles.


Tenacatita is a double bay just west of Barra Navidad/Melaque and 31 miles west of Manzanillo. The east lobe of Tenactita is more protected and less developed. The west end of that bay has private resort but the west corner behind a headland had a palapa restaurant at the mouth of a mangrove lined estuary and is the best protected anchorage. Being late in the season, we shared the anchorage with only one other boat, Georgia B from Astoria. 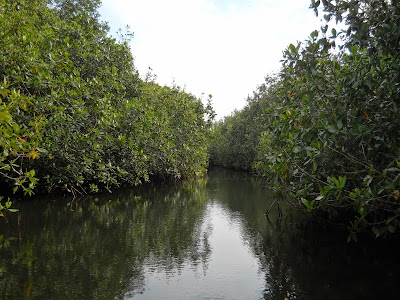 The beach often is a surf landing and after a quick dinghy trip in, we decided to let the tide and surf calm down before we entered. Back to the boat to relax after the night passage and then in the afternoon we again checked out the estuary mouth.
We spent an hour and a half riding up into the mangrove with the channel narrowing until we were in a verdant green pipe, Lexi and Mags watching for cocodrilos. I was concerned about the obvious falling tide and reports I had read about the estuary being more shallow since a hurricane a few years ago. We finally turned after seeing numerous bird species but the elusive logs with eyes evaded us yet again. A fun trip.


Dinner at the palapa was excellent. Tenacatita is noted for its local favorite “rollo de mar”, much like chicken cordon bleu but is a fish fillet wrapped around shrimp wrapped with a slice of bacon and covered in a rich almond cream sauce. To die for. Sorry no photo.


With our long delay in La Cruz we will make Tanacatita a one day stop and head for Iztapa/Zihuatanejo about 10:00 am tomorrow.
Posted by s/v Kanilela at 5:41 PM