Time Flies in El Salvador (when you are riding the buses!) 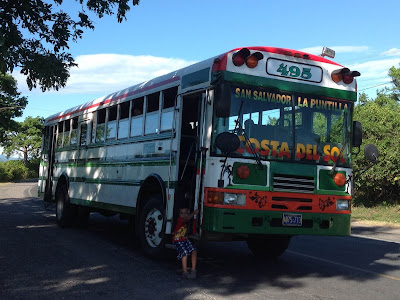 Two separate bus routes run up the long peninsula past the marina entrance. The number 495 buses, with San Salvador – Puntilla signs painted on the windshields, clearly goes to San Salvador. I will say more on the 193 bus route to Zacatecatoluca in the next post. But where in San Salvador does the 495 go? And how quickly does it get there? Well, it stops at the Terminal de Autobuses del Sur, out in the southern suburbs and it is painfully slow, stopping to pick-up and drop passengers at any point along the route. The trick is knowing that at the junction of the Playa del Sol Road and the east/west highway #2, a place called El Arco, there are multiple connection opportunities with buses and micro (meecro) buses going west to various destinations in San Salvador and east to the eastern part of the country. But, the real secret is, to get a seat on one of the micro buses you get off the 495 and jump onto the 138 where it does a u-turn in the middle of the road, one stop before Arco. First on the empty bus gets a seat! And better yet, the 138 goes to a mirco bus terminal one block from the Centro Historico, in San Salvador.


At all more important crossroads, venders board the buses squeezing their way from the front or back doors thru the jammed aisle to the opposite door selling drinks, fruit, endless types of foods, and an amazing array of consumer goods. El Salvador has a major unemployment issue but the response is to be innovative and entrepreneurial, sell, sell, sell. If the buses are not too packed some will ride the bus for a stop or two, while loudly explaining the virtues of their cell phone chargers, miniaturized clocks or portable speakers, all punctuated by the inevitable “ at a new low price of ……  Much cheaper than in the big stores.” It is a great Spanish lesson!

Some must see sights in Historic Central San Salvador are the Catedral Metropolitana on the Plaza Barrios with the Palacio Nacional on the opposite side. The local Mercado Central or public market, a few blocks, away covers many blocks under metal roofs and makeshift canopies, and sells everything imaginable. It is not a tourist venue as there are almost no tourists in San Salvador, but rather a working market used by most of the Salvadoreños living in the central district.
The walkways are hot, narrow and loud as everyone competes for attention. In some areas the smells are overpowering. The old streets are narrow in all of the Central District and vendors take over the sidewalks. Pedestrians are forced into the streets where the buses and taxis vie with each other to fit thru impossible openings while all the while beeping horns and blasting their air horns. Crossing streets is not for the feint of heart and pedestrians have no right of way. The exhaust fumes hang in the sweltering streets. The area is said to be dangerous after dark and I have little cause to doubt the assessment.

A few blocks east of the Plaza is the Parque Libertad, with Iglesia El Rosario on the east side. From the outside the church is a rough formed, fairly new, 1971, but dilapidated, concrete double arch structure spanning 80m with the arches 24m apart. Inside, it is breathtaking.
A series of beams span between the arches creating steps that are glazed with coloured glass in a rainbow transition. The effect is beautiful, the sun filled space through the coloured glass, with the bright hues cast on the floor and walls, highlighting scrap steel sculptures is riveting. Definitely the most impressive modern architectural design feat that I have seen for a long time.


El Salvador and San Salvador have had a history of challenges. Volcanos are numerous, some still recently active, earthquakes and floods alarmingly common and their civil war just ended in 1992. And yet, when you drive into the hillsides surrounding San Salvador with newer suburbs, see the wide winding streets with modern cars and SUVs, walk through the vibrant modern shopping malls, some of them enormous by US standards, you realize there is a rapidly emerging young middle class.


Although San Salvador is only about 70 km from the marina we decided we would stay for two nights. We stayed in the Hotel Tazumal (503-2235-0156), a cheery, very clean 10 room hostel/hotel near the Nacional University and recommend it highly. Concepción, the owner, and Angelíca who manages bookings and the desk were great. The included breakfasts were an excellent start to our busy days. The area is very tranquil and safe for walking, even at night. While there, Angelíca connected us with Nelson who lives in the area and has a Taxi Service (503-7181-2590). Because there were four of us, it was an economical way to get to the more remote sites. The Guzman National Museum of Anthropology was well worth the visit. Nelson also took us on a very full day trip on the Ruta de Flores / Ruta Arquiologica to the northwest of the country, that I will do as a separate page.


Hotel Tazumel is on the northern edge of the area known as the Boulevard de los Heros which is north east of the Zona Rosa. Both of these areas are more modern areas with many restaurant and drink options. With lots of people on the street, they are considered safe, although at night people are told to take taxis to hotels off the main streets. During the day the big food store chains, Super Selectos, Don Juan’s and Despensa Familiar in the various malls make provisioning an easy task with virtually everything is available. We have also made the daytrip in to shop and then shared a $40 taxi ride back to the marina.
Posted by s/v Kanilela at 6:04 PM