18-diciembre-2015
I have to do this blog just to keep saying Zacatecoluca! I love it!


One of the 2 bus routes running in front of the Bahia del Sol Marina is the Zacatecoluca bus 193. The route runs the 30 km to the Arco highway #2 junction and then turns east on the Lateral Highway another 20 km to the rural town of Zacatecoluca. As with most buses it was hot and crowded but because the Marina is almost at the start of the route, we had seats. The usual venders boarded the bus and tried to hawk their wares until at one stop two entertainers boarded the bus. Brothers? possibly. The older, about 19 dressed in a clown costume stood behind the younger who was probably 8 or 9 also in a clown costume. Their make-up was very good, much more professional than the usual black and white seen in the north. They exchanged high speed riffs so fast I could only catch the odd word. The rest of the passengers were unusually quiet and laughed and applauded at intervals. The boys quickly collected money and jumped off the bus to board the next one available. I was too spell bound to take a picture so I am hoping Mary’s turned out.


Zacate, the short form for the town name used by the bus hustlers, has a Don Juan and a Super Selectos for provisioning and both within walking distance of the bus terminal for the return trip to the boat. The plaza has some good statues facing the church.

Our second bus adventure to the east was for a two night stay in the mountain village of Alegría.  We road our local bus out to El Arco and found the trail up to the highway to wait to flag down bus 302 to Usulután. As the map shows, we travelled through Zacate to the next large town of Usulután.


When cruising the coast of El Salvador you typically have two choices for moorage. Both are set on mangrove estuaries. We chose Bahia del Sol on Bahia Jaletpeque because it was close to the mouth of the estuary and also, Bill and Jean, with their efforts to create and organize the annual El Salvador Rally, have given it good publicity. The next moorage option is Barillas Marina located 9 miles up the Jiquillisco Bahia estuary 27 miles south of Bahia del Sol.


We were curious about Barillas and having Paul and Mary to share the cost, we decided to take a taxi the 15 miles  from Usulután down to the Marina. Much to our surprise the first taxi driver I started negotiating with adamantly refused to go to Barillas. “Demasiado peligroso!” Too dangerous. We decided to have lunch and walk around the town. The restaurant owner concurred with the taxi driver’s opinion, as did the wide eyed, fearful, young girl who was serving us. All were very concerned about our safety. We have grown accustomed to people on the buses telling us to watch our bags but this was different. There was a palpable fear in their actions and voices. It seems that in the last three months there has been a growing problem. We do not know how many boats are in Barillas but we have been told there were only a few and that the owners were away, leaving the boats in the care of the marina but we are glad we did not sail into there as travelling could be limited.

Although the number 348 bus runs from Usulután through the small town of Santiago de María and then up the side of the volcano to Alegría, there was some question as to whether we were too late to get beyond Santiago de María so we decided to take a taxi instead. There were about six taxis at the stand when I started to negotiate a price. The first driver in line wanted $30 and would not drop to the $20 I was offering. Much to my surprise another driver said he would do it and then said to us in good English, “If he doesn’t want to do it that’s his loss.” I mentioned the road south through the cane fields to the Marina Barillas, to the group of drivers collected and they all agreed it was too dangerous to risk. So we headed north into the mountains for Alegría with our driver who had lived in Arlington, Virginia, before returning to El Salvador when the civil war ended.

We had read about Alegría in Lonely Planet and some cruisers had recommended it as well. The elevation made the mountain air clean and cool. Pride in their village has the locals both friendly and involved in keeping it clean. The elevation also permits flowers and vegetables to grow that are not able at the hotter sea level.

The hotel/hostel we had hoped for was fully booked when I phoned but they suggested another option, Cabañas La Estancia de Daniel at 503-2628-1030. Although it was not listed in The Lonely Planet, I booked 2 bungalows with baños (bathrooms) but I was not too certain what we might find. At $25 each per night, it was cheaper than the recommended choice.


We had the taxi drop us at the small plaza that was fully decorated for Christmas. As it is a small mountain side village, flat land is at a premium and the blocks are short on the winding streets. The church is set high on the north side of the plaza with steps climbing to the entrance. Temporary Christmas street kiosks were set-up on one side with food and small trinket type merchandise. There were a few artisan tourist shops on the plaza and four or five restaurants within a block or two as well. Our Cabañas were about a block off the plaza and turned out to be more than acceptable. There were 5 bungalows made with volcanic stone walls and floors, complete with bathrooms and TV, set in a walled courtyard. We would have given up the TV to get hot water but our inline electric water heater was not working and the mountain air made for a very cold shower. 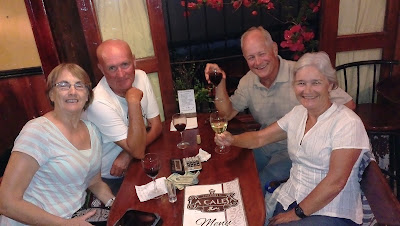 The restaurants closed early and we found ourselves wandering the streets hunting for something still open. A lighted awning on a side street attracted our attention and there were a few people eating still when we arrived. It had five tables and a curved J-shaped bar. The bartender/waiter had the biggest smile for us on entering but was actually quite shy in conversation.

He explained that the bar’s owner also had a restaurant, La Calesa, close and we could order from that menu. Drinks came quickly as did the food, complete with two waiters running through the streets of the village. We had both ordered fajita type dishes for two that were excellent and there was no shortage of wine.

The following day we caught the 348 bus as it ran past the plaza and our bungalow, down the hill to the somewhat larger town of Berlin. It was a steep drop down the side of the volcano past a geothermal electric generation site stopping at the town plaza. Berlin was populated by migrants from Germany and Italy back at the beginning of the coffee plantations at the turn of the century.

Some of the buildings still have the metal siding panels imported from Belgium giving the town a unique feel. It is a busy center for the surrounding villages and lacks the charm and cleanliness felt up the mountain in Alegría. After wandering the streets, stopping for a much needed haircut and having lunch, we decided to catch the bus back to Alegría.


Alegría is also known for its small emerald green Laguna set in the Tecapa Volcano’s crater, about 3 km uphill from the town. It was a pretty hike through hillside coffee plantations with some incredible miradoras, viewpoints, with vistas down to Santiago del María and beyond. The crater’s floor covers about 500 m by 300 m with the lagoon being about 150 m by 100 m. The sand gravel has obvious sulphur content but the lagoon did not taste or smell heavily sulphurous.

The hike down was very rewarding with verdant vegetation, numerous bird species and smiling locals trudging their way uphill to their homes after a day of work.


The return trip to Bahia del Sol was an exercise in perfect bus connections. Our 348 bus stopped at Santiago de María so we had to walk through their street market for four blocks to the other side of town to catch a bus to Usulután. That bus left almost immediately dropping us at the bus depot on the east side of town where our driver blocked the exit of an express air conditioned bus ($3 instead of $1.50) so we could jump on. It took us almost nonstop to the Arco intersection where we climbed down from the overpass to our bus 495 and out to Bahia del Sol. About $5.20 for all four buses and it took only four hours. Especially good in that we had seats most of the way!
Posted by s/v Kanilela at 4:42 PM