No, not one of the most famous Pacific Islands, but truly incredible. The Cruiser’s Guides all note that it is the worst place on the Mexican coast for ships losing their anchors in the rocky anchorages and advise strongly against approaching in anything but the calmest conditions. Well, after a trip that started from Mazatlán with a good WSW wind we were thinking we would pass it by. During the night the coastal thermal died and we were motoring on a flat calm sea. As dawn came Isla Isabela emerged from the darkness and was too tempting to ignore.


She has been coined the Galapagos of Mexico and was the site of 2 documentary series by National Geographic and Jacque Cousteau and is a UNESCO World Heritage site. It is of volcanic origin, about 1 km by .5 km, and is notable for the huge diversity of sea birds. We dropped anchor on the east side just south of the Las Monas pinnacles. After the dry cactus Islands of the Sea of Cortez the green canopy looked inviting, all be it a hat would be a necessity with the cloud of large birds circling. ﻿﻿﻿﻿﻿﻿
﻿


We dinghied to the south bay and landed where there is a fishing camp set up with several pangas unloading rays and various fish. There are no finished houses or electricity, just the shacks the fishermen sleep in. We found a trail up to the rim of the crater and down to the small crater lake. The canopy, though dense, was rarely more than 3 to 4 meters high and supported an almost continuous frigate bird nesting colony. Although we were within 1 meter of them as we walked under, they exhibited no fear. They are big birds with a 2+ meter wing span and a deep cut swallow tail. They live off fish but do not land on the water merely skimming the surface with their beak when they see a fish.
Most of their time is spent in groups circling high overhead riding the thermals and yes, as I said in our Bahia San Gabriel post, the males are famous for their large scarlet throat pouch that clearly the ladies dig! If their wings do get wet they must land and dry them in a Count Dracula’s cape-like pose.


After about a half mile, we had skirted the west and north sides of the lake and had climbed out of the crater, emerging on the shoreline close to Las Monas and an anchored Kanilela. We carefully threaded our way through nests of blue footed boobies to the beach. They too showed no fear of our presence and had a peculiar habit of lifting one blue foot as though for inspection.

They are a big bird as well, about a 1 to 1.2 m wingspan that gracefully skim the ocean surface but up close, how can you take anything seriously that is called a boobie and is immensely proud of their blue feet?
The island is home to several other species of boobies as well and in flight their feet are not visible so you have to see them on the ground to know who you are being entertained by. 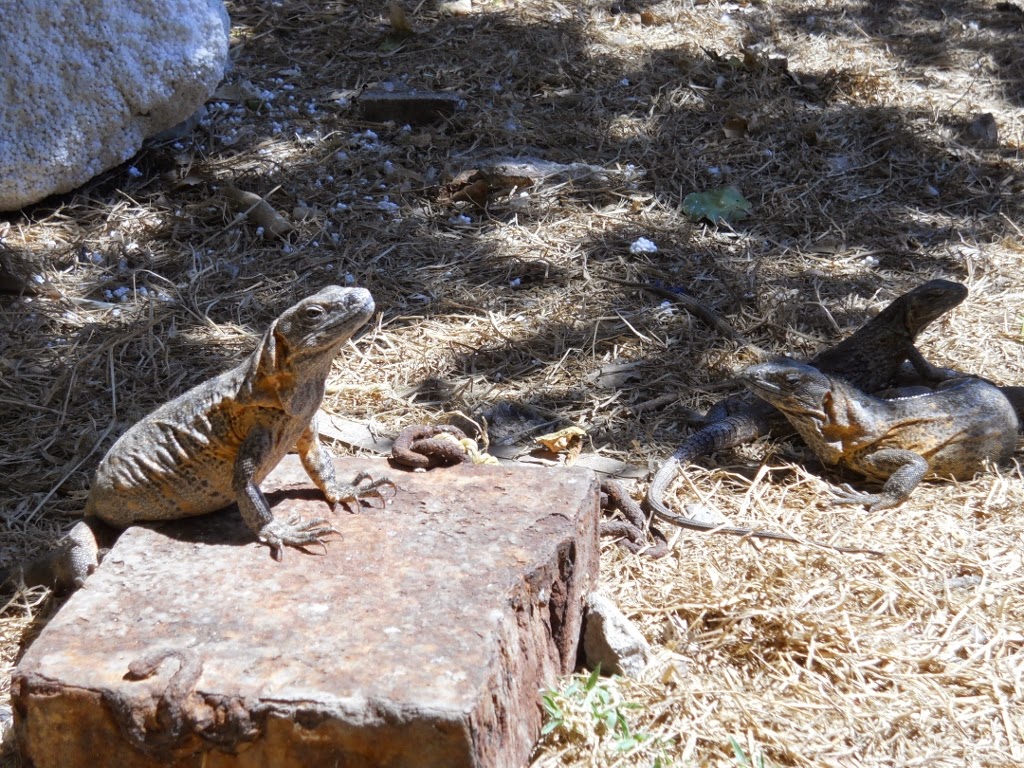 Lest you think there were only birds, and there were numerous other varieties, the Island is home to indigenous iguanas too. By the time I got to do some snorkelling the wind was picking up and the vis was reduced but there were a lot of big schooling Jacks and lots of good sized reef fish. Lots of variety and colour.


With the wind picking up we knew we would be tempting the anchor Gods by staying and will leave in the morning. South, always South.